Camera/Producer Joanna White has been busy recording the airfields of Lincolnshire from the air, and is now gathering video footage of the 86 airfield sites, past and present, from the ground.  Along with DVD researcher/narrator Alan Stennett, Joanna hopes to produce a lasting record of Lincolnshire’s aviation history, which began in October 1811.  On that date James Sadler (the first Englishman to ascend in a balloon) landed his hydrogen filled balloon at Heckington, near Sleaford, having been blown 112 miles from Birmingham.  Two years later he returned again landing at Dekin Lodge, Stamford.

Lincolnshire’s first aviator was Montague F Glew of South Kelsey.  In 1913 Glew gave a flying demonstration in his Blackburn Monoplane at Market Rasen using a field off Legsby Road, and a few months later gave an ‘exhibitionof flights’ at Horncastle.

Joanna White comments: “…the very early years of aviation must have been so very exciting for those involved, and for the public who witnessed it. Today flying is commonplace. Though it still has its own magic, we can’t ever really know what it felt like to see a flying machine for the first time. And some of the early designs were remarkable!  I never tire of looking at old photographs and film of man’s first attempts at flying, and marvel at the twentieth century development of aircraft.” 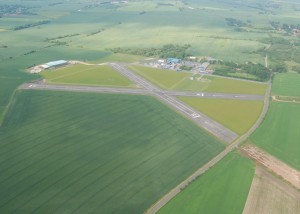 Wickenby Airfield, near Lincoln. One of the few WW2 airfields which has all its original runways still in tact (right).

The first major blossoming of airfields in Lincolnshire began in World War One, with the establishment of Home Defence Squadrons. With each squadron appeared a number of ‘Flight Stations’, like No.33 Squadron at Gainsborough who had aerodromes at Scampton (then known as Brattlesby), Elsham and Kirton in Lindsey, plus another nine landing fields around the county.  Most sites today have reverted to farmland, are covered by buildings or WW2 airfield sites, making them very hard to locate.  As well as Royal Flying Corp sites, our county was home to a Royal Naval Air Station seaplane base at Killingholme, kite balloon base, air gunnery school and an airship training station at Cranwell.  There were also two aircraft acceptance parks at Lincoln, used for test flying aircraft built at the local manufacturing firms of Ruston, Proctor & Co. and Clayton & Shuttleworth.

In 1935 the second great aviation era of Lincolnshire commenced, with the announcement of the government’s RAF expansion scheme.  Several of the counties older airfields were modernised, others were reoccupied after years of being farmed, and totally new sites were established.  Many are still visible today and easily recognised by their A shape runways, brick hangars, control towers and perimeter tracks (which often join wtih country road networks).  By the end of WW2 there were 49 military airfields in Lincolnshire, more than any other county in Britain. 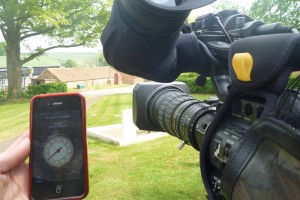 Finding the sites on the ground can be complicated and Camera/Producer Joanna White has found the iPhone compass and GPS features essential – like here at Cuxwold (right).

The remaining airfields and the ghostly sites of pre- and WW1 airfields are captured on camera by Primetime Media.  Over the last 50 years there has been a major disposal of airfield land with many sites being neglected, demolished and completely eradicated. It wont be many years before a great deal of the evidence of our aviation history is gone from the land, though the deep WW2 bomb craters that dot the wolds will still remain.

Joanna has been flying over Lincolnshire for eleven years, and during that time she has felt a growing need to capture what is left before time runs out.  But finding the sites isn’t always easy.  Some of the WW1 landing grounds have a very general location, often only known to locals and researchers by their bearing from a local village church.  Joanna comments: “Some airfields have been particularly difficult to locate.  I still am not certain I have Harlaxton on tape.  It was a WW1 training aerodrome and home to 44, 20, 26, 53, 54, 68 and 98 Squadrons.  It was closed in 1920 and re-opened again during WW2 welcoming aircraft like Short Stirlings and Vickers Wellingtons.  It was always a grass airfield, and in the 1980s much of it had disappeared under an open cast iron ore mine, which today I cannot locate. A good example of our heritage disappearing from view!”

She concludes: “I hope that what I record will show just what an illustrious history our county has, and continues to have, in aviation.  We can be overlooked as a quiet arable county, but when you see what we’ve contributed to the history of British aviation – Lincolnshire is quite legendary.”

Details of the DVD production will be posted as it develops. If you know of anyone who has early photographs, film or memories of the Airfields of Lincolnshire then please contact us.